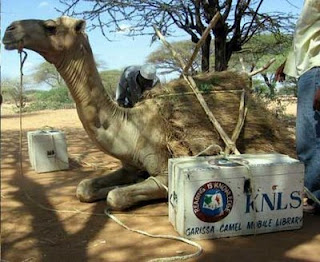 The use of the Camel Library Service (CLS) is confined to the North Eastern parts of Kenya. The concept was conceived in 1996 during the KNLS Board members’ development tour to the region. At that time, the library services in the area were only being provided from Garissa Provincial Library.
North Eastern province is a fast region that is inhabited predominantly by nomadic pastoralists. Settlement pattern in the region is dictated by the harsh climatic conditions and bad terrain that characterizes the area. The major economic activities of the pastoralists are livestock keeping and temporary agricultural practices. The region also experiences poor infrastructural that heavily impedes transport and communication systems for the population.
However, during the KNLS Board’s development tour to the region, an idea was borne, that by using camels as means of transport, the library service could start providing mobile library service to the communities and groups outside Garissa town. Even though KNLS operates motorized mobile services in its network, it had all along proved difficult for the Board to introduce such services in North Eastern province. This mainly was due poor roads, temporary settlements and nomadic lifestyle of the community.
Subsequently, the camel library service commenced in the region in 1996. Following the success of the service, a similar service was started in Wajir in 1999.
Fuente: http://www.knls.or.ke/index.php?option=com_content&view=article&id=29&Itemid=34
Publicado por Biblioteca EU la Inmaculada en 9:43