The word is their bond 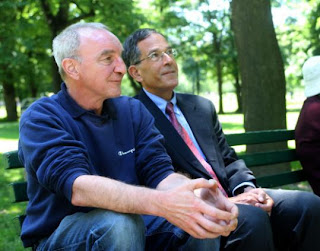 The story of the book club, now in its 10 th month, is a tale of ordinary city life upended. It began with a stunningly unlikely friendship between two men from different words: Peter Resnik, a high-powered lawyer on his way to work, and Rob, a homeless man guarding a friend´s shopping cart on Boston Common. Trought months of daily conversations, that began with jokes and sport talk and gradually delved deeper, they found a common interest: literature. And when they saw the bridge that they had built, they recognized its potential for others.
In a short time, they say, the book club has proved its power to reach homeless people and build their confidence.Emboldened by its success, Ron Tibbetts, a Beacon Hill church deacon and longtime homeless outreach worker, has launched plans to replicate it. His new nonprofit group, the Oasis Coalition, aims to establish dozens of small social groups citywide, filling the gaps left by large, institutional programs that offer the homeless food and shelter but little or no personal connection.
Fuente: http://www.boston.com/news/local/massachusetts/articles/2009/07/05/the_word_is_their_bond/
Publicado por Biblioteca EU la Inmaculada en 11:24